Mary Beth Edelson: Nobody Messes with Her 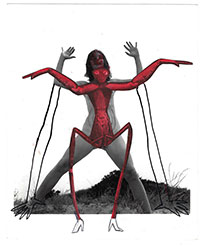 Mary Beth Edelson (b. 1933 in East Chicago; lives in New York) is one of the most important representatives of feminist art of the 1970s. In the course of her career the American artist has conducted ongoing research on the female identity. In Edelson’s first solo exhibition in a German institution, the Kunsthalle Münster is showing works spanning almost five decades of the pioneering artist’s production, who is playing a considerable role in the history of the feminist art movement. By featuring in her works an independent female subject that does not define itself via its relationship to men, she breaks with the prevalent reality. She no longer portrays the woman as the other, as the relative object, but instead creates images of a genuinely feminine representation and develops a unique feminist aesthetic.

Before the backdrop of civil rights and women’s liberation movements of the late 1960s and the early 1970s, specific women’s issues were being publicly debated for the first time. Like many pioneers of the women’s movement, it was also Edelson’s commitment to the American civil rights movement that brought her to feminist art. A general critique of the establishment and its overcome values had made a whole generation feel that they would be able to change prevailing social standards. The second wave of feminism brought forth debates, theories and groups, who created an awareness for the treacherous trap of sexism, firmly rooted in everyday life. In no time, women had gained an audience in public, teamed up for joint actions, and held demonstrations. With resolve and a newly gained self-confidence, female artists for the first time in history succeeded in collectively standing their ground in the world of visual art.

In her paintings, collages and performances she subtly and provokingly—and not without a sense of humour and irony—deconstructs the traditional iconography of femininity, questions societal constructions of femininity and challenges hegemonic patriarchal values.To this end, she frequently reverts to various culture-historically significant female figures in her works, where each character embodies an entire concept in itself: Judith from the Old Testament and Salome from the New Testament, as well as Wonder Woman, the ancient figure of Baubo or pop icons such as Grace Jones or the actress Gena Rowlands.

However, Edelson’s endeavours to change women’s role in society are not limited to her art but also manifest themselves in her commitment in collectives, such as Heresies, Chrysalis and WAC (Women’s Action Coalition) or her exhibitions at the A.I.R. Gallery, founded in 1972 as New York’s first gallery run by women, which featured exclusively women artists in their programme and thus closed an important gap in the art business.

The exhibition is supported by: