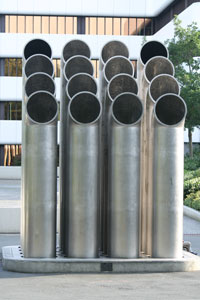 Gräsel’s sculpture consists of closely placed pipes, each ninety centimeters in circumference. Each ends with a ninetydegree arched element forms a visible opening. The sculpture’s massive volume is therefore thoroughly permeated by a sense of movement that alludes to technological functions.

Gräsel, born in Bochum, Germany, began with cylindrically shaped objects in the 1960s and later worked with prefabricated shapes whose austere optical function expresses an optimistic relationship to technology. Another of Gräsel’s ventilation sculptures is next to the Nord-West Lotto building, on Von-Stauffenberg-Straße.