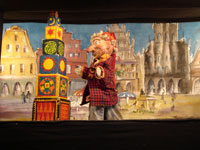 Caspar in the 'Charivari Puppentheater'

Amusing and exciting puppet theatre is performed in the Charivari - in the traditional vein - with Caspar and Mary, king and princess, grandmother and the devil. About 300 puppets are used - each with its own name and history.

The curtain is raised about five times a week. Currently thirty-four plays are ready to be performed, of which about a dozen is for adults. Most often they visit the theatre in the evening, becoming children themselves for a while.