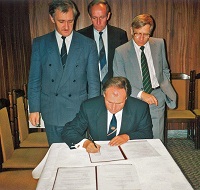 First contacts with Lublin date back to the 1970s. At that time, the Franz-Hitze-Haus Academy was already cooperating with the Catholic University of Lublin. The friendships that were subsequently forged between the people of Lublin and Münster eventually led to the signing of the official partnership document in November 1991.

Since then, the twinning has developed into a lively and multifaceted friendship. There are partnerships between schools, parishes and choirs, and there is regular exchange on the administrative level, too. In both cities, partnership associations were founded. Repeatedly, Münster and Lublin have jointly realised European funded projects. The active town twinning can rely on many personal friendships, which are intensively lived especially through the regular citizens’ trips organised by the partnership associations. In 1992, this even developed into a triangular partnership: just as the cities of Münster and Kristiansand had found each other in Orléans in the 1960s, Lublin became the twin town of Rishon LeZion. 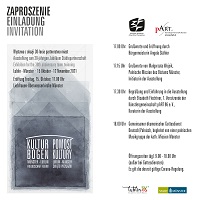 In the context of the 30th anniversary of the town twinning, the cities of Lublin and Münster are presenting an exhibition in cooperation with the association of Polish artists and designers, the district of Lublin, and the artists´ association pArt 96 e.V.. The exhibition was already shown in Lublin in September and will take place daily in Münster in the Liebfrauen – Überwasserkirche from the 15h of October till the 12th of November 2021. The works of the 21 participating artists from both cities will be shown on large billboards. Additionally, information concerning the city twinning will be provided. The exhibition of the original paintings with the participation of the Lublin artists had to be postponed to the next year due to the corona pandemic. In compliance with the corona restrictions, you are very welcome to the opening on the 15th of October at 5 pm! You can enjoy the exhibition in advance through a virtual tour: Arch of culture Münster – Lublin

The city twinnings with Lublin and Rishon LeZion have been celebrated

This year, the city of Münster celebrates 40 years of city twinning with Rishon LeZion and 30 years of city twinning with Lublin. Moreover, the cities are closely connected through a triangular partnership. Upon the invitation by Markus Lewe a delegation from Lublin, lead by the city president Dr. Krzysztof Żuk, came over to Münster. Through an official holiday on the 2nd of September 2021, the many years of twinning have been honoured adequately. Unfortunately, the Israelian city government could not visit Münster as planned, due to the Covid travel restrictions. Raz Kinstlich, mayor of Rishon LeZion, very much regrets this and expressed his hopes to meet both his colleagues in person in 2022.

“At mine and at yours: Youth exchange within the framework of the German-Polish municipal partnerships”

To intensify the friendships between the youth of Münster and Lublin and set new impulses, new ways will be explored during the anniversary year. That is why Münster, Lublin, and their second German twin city Delmenhorst applied for the participation in the educational and networking project by the German-Polish youth office (DPJW). More than 150 municipalities have shown interest. The tripartite alliance Münster- Lublin- Delmenhorst as well as 16 other municipal partnerships have now gotten the confirmation of participation.

Officially, the project starts with an online meeting in May. Afterwards, with the support by the DPJW, ideas and a plan of action for 2021/2022 will be developed and set up. Topics motivating the youth and suitable for a cooperation will  be identified, possible personal or online meetings discussed, and cooperations between all institutions of the three cities will be examined and implemented. The third and last phase of the project is another network meeting in autumn 2022 in Poland, where the participants can present their new cooperation projects and further develop ideas for more engagement in the youth sector.

Youth institutions and organisations as well as youth culture associations from Münster, which want to participate in the networking project, can contact the office for international work. Contact person is Susanne Rietkötter.