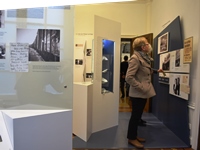 Room 2: Segregated by the Master Race

Exclusion and terror formed the basis of the Nazi state. Initially, many political opponents were persecuted, such as members of the SPD, KPD and trade unions. However, racism was the core of National Socialism. Segregation of Jews and Sinti from German society began with widespread employment bans and dispossession and ended in deportation, enslavement and extermination.

People were also deported into the Reich itself: millions of people from the occupied territories had to come to Germany as slave labourers. Often treated cruelly, they had to save the economy, as German workers had to go to war.

All of this happened while the public looked on, and normally with its approval. Countless people enriched themselves from seized property. The entire police took part in the persecution. Deportees were driven together in clear daylight. The police neither protected nor served all citizens. The longer both the Nazi regime and war lasted, the more radical and brutal the police force became.

Administration and exhibition are closed on September 20th and October 3rd.

Please feel free to call or write an e-mail for a separate appointment. Please also call for guided tours through the permanent exhibitions, for projects for school classes and seminars.