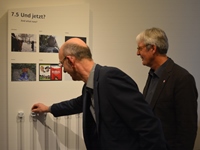 Room 7: The future of the past

After 1945, the Nazi period remained taboo.
Scores of survivors had no strength to speak out, the memories were far too painful. On the other hand, large sections of the population tried hard to reinterpret the recent past to their benefit; Perpetrators even portrayed themselves as victims.

As time went by, individual critical citizens, in particular the children of perpetrators and persecutes, began to confront the generation of their parents.
New initiatives such as historical workshops emerged, which developed new forms of public remembrance.

In the 1990s, Germany grew more aware of its past. Victim groups that had been forgotten were remembered. This has compelled institutions such as the police to face their historically burdened past.

Now, the basic issue is how to use history in order to find a position for both the present, and the future.

Administration and exhibition are closed on September 20th and October 3rd.

Please feel free to call or write an e-mail for a separate appointment. Please also call for guided tours through the permanent exhibitions, for projects for school classes and seminars.