Not only is Münster a city which is known as the major centre of the Münsterland region but also as a city that is present on the international stage. For decades, the city of Münster has been involved in town twinning with nine other cities around the world, one inner-German town friendship and one special relation with Braniewo in Poland. Moreover, there is a partnership between Münster-Hiltrup and the French town of Beaugency. The relationships between the cities are multifaceted and are filled with life by the administration as well as by the citizens. 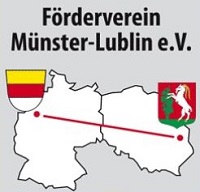 Lublin is the largest Polish city near the border with Ukraine and has been chosen as a nationwide hub for humanitarian aid. Lublin organises transports, warehouses, and green corridors for aid goods and supplies. Additionally, a considerable number of refugees from the war are already accommodated locally. In coordination with the city of Lublin, the Münster-Lublin Support Association would like to provide support and is asking for monetary donations to its account at Sparkasse Münsterland Ost DE 44 4005 0150 0022 0041 05, specifying the reference "Lublin helps Ukraine". Municipal assistance for refugees from Ukraine 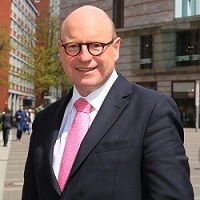 First Mayor Markus Lewe has strongly spoken out in favour of the continuation of the town twinning between Münster and Ryazan. "Through town twinning, civil society groups in particular find each other - thus also people who do not necessarily agree with the decisions of their government. It would be bitter if we were to break off these last opportunities for a relationship, so we are using this chance to exchange messages of peace." The International Office is in regular contact with the city administration of Ryazan at the working level and also asks the many citizens and institutions in Münster that have contacts with Ryazan not to break off the dialogue with the people in the twin city.

Annual meeting of the twinning associations

Annual meeting of the twinning associations 2022

Every year, the International Office invites to the traditional annual meeting of the twinning associations. Unfortunately, this year the meeting had to be held digitally again. Nevertheless, the atmosphere was positive. The twinning associations exchanged information about their activities in times of Corona. Thanks to various digital communication possibilities, it was possible to successfully implement new event formats, so that one remained connected with the twin towns throughout the year. Nevertheless, everyone is looking forward the time when face-to-face meetings will be possible again. Therefore, hopefully this year the traditional citizens' trips to the twin towns will take place as planned.

In the views of the tense global political situation, First Mayor Markus Lewe and the deputy mayor of Ryazan, Larissa Maksimova, and the head of the Ryazan city administration, Elena Sorokina exchanged opinions in a video call regarding the twinning of Münster and Ryazan. In the conversation, both sides emphasised the deep bond and friendship between the people of Ryazan and Münster. Lewe and the city leaders of Ryazan agreed that the city partnership, which has existed for 33 years, and the many personal contacts must be cultivated and expanded more intensively than ever before. Official press release

On the Day of Remembrance for the Victims of National Socialism, the Youth Department and the International Relations Department of the City of Rishon LeZion organised a virtual commemoration ceremony for their twin cities, in which the city of Münster also actively participated.

First Mayor Markus Lewe sent a message of greeting to Münster's Israeli twin city on the 27th of January. Mayor Klaus Rosenau, pupils from the Peace School, members of the Young Forum of the German Israeli Society of Münster, and representatives of the International Office took part in the event. The pupils from Münster read a poem during the virtual ceremony; pupils from other twin cities of Rishon LeZion such as Debrecen, Krasnodar, Lublin, Kharkiv or Nimes participated as well. Particularly impressive was the contribution of contemporary witness Rose Lipszyc.

With a letter to the First Mayor of the city of Ryazan and a video message for the people in Münster's Russian twin city, First Mayor Markus Lewe sets an accent against the worsening situation in the Ukraine conflict. "Many people in Europe are worried," Lewe says in the video. "Right now we have to stick together. Perhaps we will succeed in sending a sign of peace with this."

Celebration of the Day of German Unity in Mühlhausen

Already for the 7th time this year, Münster and Mühlhausen celebrated the Day of German Unity together, this time in Mühlhausen. Lord mayor Dr. Johannes Bruns and mayoress Angela Stähler acknowledged the city twinning between Münster and Mühlhausen in their speeches. Moreover, Hedwig Liekefedt and Stefan Leschniok from the council of the city of Münster as well as a delegation from the association “Friends of Mühlhausen” with their chairman Dr. Rüdiger Holtmann travelled to Mühlhausen for the celebrations. Official press release

On the 24th of September 1960, the partnership with the French city Orleans was sealed in Münster in the Friedenssaal (Hall of Peace) of the municipality. Exactly 61 years later, first mayor Markus Lewe and mayor Serge Grouard signed the renewal of the partnership oath in the Hôtel Groslot, the historical city hall of Orléans. Another occasion for the visit was the traditional “Festival de Loire”, at which Münster presented itself to the citizens of Orléans. Within the framework of the work meetings between the municipalities, topics such as economic development, mobility, as well as climate protection and climate adaptation in the two cities were highlighted among others. Official press release

After a joint meeting of the administrative boards of Enschede and Münster on the 21st of September 2021, the mayor of Enschede, Onno van Veldhuizen, and first mayor Markus Lewe signed the twinning certificate in the Friedenssaal (Hall of Peace). First mayor Markus Lewe referred to the long tradition of cooperation with Enschede as well as the equally long list of future projects. “With projects like this, we will still have lots of joy together”, said Lewe. Colleague Onno van Veldhuizen comment on the signing of the certificate: “That was a great start for a very good future.” The certificate should have already been signed in May 2020. Due to the Corona pandemic, the ceremony has been postponed to 2021. Official press release

The city twinnings with Lublin and Rishon LeZion have been celebrated

This year, the city of Münster celebrates 40 years of city twinning with Rishon LeZion and 30 years of city twinning with Lublin. Moreover, the cities are closely connected through a triangular partnership. Upon the invitation by Markus Lewe a delegation from Lublin, lead by the city president Dr. Krzysztof Żuk, came over to Münster. Through an official holiday on the 2nd of September 2021, the many years of twinning have been honoured adequately. Unfortunately, the Israelian city government could not visit Münster as planned, due to the Covid travel restrictions. Raz Kinstlich, mayor of Rishon LeZion, very much regrets this and expressed his hopes to meet both his colleagues in person in 2022.

"Experience sport together for fair play in an international context" was the motto of this year's Twin City Games in Münster. For the first time since the beginning of the Corona pandemic, an event with real international encounters took place. The anticipation for the event was huge. Some of the foreign guests even accepted a quarantine after returning home. For five days, young people from Enschede (NL), Kristiansand (NO), Lublin (PL), Rishon LeZion (ISR) and Münster exchanged sports and ideas together. In addition to sports activities in multinational teams, there were workshops on the topics of fair trade and fair play. The highlight of the encounter was the sports festival on the sports campus of the WWU. The Twin City Games were organized in cooperation with the City Sports Association Münster and the University Sports Center Münster. The meeting was sponsored by the Minister of Europe of North Rhine-Westphalia through the program "Europe at Home". For the production of the jerseys and gym bags for the participants, attention was paid to sustainability and fair trade. A big thank you to Vamos e.V. and WEED e. V. for organizing the workshops.

One planet - one friendship - one (E)mission!

Within the framework of the project "The planet in your hands", initiated by the Franco-German Youth Organization (OFAJ/ DFJW), young people from Münster and Orléans work together in creating an online journal. Using the title "One Planet - One Friendship - One (E)mission!", the journal covers topics related to the Sustainable Development Goals (SDGs). Each month, informative short videos provide insight regarding mobility, water, waste, energy and biodiversity from both twin cities. The project is carried out in cooperation with the Bennohaus Münster, the Youth Council and the Regional Youth Information Center Orléans and with the support of the cities of Orléans and Münster.

Click here for the videos: The planet in your hands 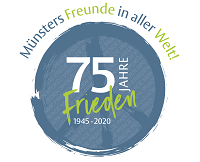 Commemoration after the World War II

The year 2020 marks the 75th anniversary of the end of World War II. Causing over 60 million deaths, the Second World War was the bloodiest conflict in the history of the world. A war that was started in Germany brought horror over Europe and the whole world. The majority of Germans stands by the historical responsibility that arises from this war. As a city of peace, Münster wanted to take on this responsibility in particular. Together with its twin towns, the city of Münster commemorated the terrible events on November 20 and at the same time set a sign for peace in Europe and worldwide. Due to the corona pandemic, the memorial event took place via video conference.
Impressions from the video conference

An eight-member delegation from Mühlhausen, led by Mayor Dr. Johannes Bruns, came to Münster on October 2 to take part in this year’s non-public ceremony marking German Unity Day at the town hall. This was followed by an anniversary celebration on the 30th anniversary of town twinning. Unfortunately, due to the corona crisis, only a few guests from Mühlhausen and Münster could attend the celebration. The city dean Jörg Hagemann held a peace service in the Lambertikirche. The German Amateur Radio Club Münster set up a radio bridge to Mühlhausen on that day.

Partnership with a focus on climate

The round anniversary with guests from Monastir was celebrated in Münster. At the invitation of First Mayor Markus Lewe, a delegation from the Tunisian twin city visited Münster from September 11 to 14, 2019. The partnership Münster – Monastir has gained momentum on the occasion of its 50th anniversary. In recent months, citizens’ trips by the Münster – Monastir Circle of Friends have led to Tunisia, and new connections have been forged, for example a school partnership. Regarding the cooperation between the city administrations, a lot is happening, too. Both municipalities have established a climate partnership and have undertaken to jointly develop an action plan for both cities within two years.

At the invitation of First Mayor Markus Lewe, a delegation from the Russian twin city, led by Mayor Yulia Rokotyanskaya, visited Münster from June 15 to 20, 2019. During the official visit as part of the 30th anniversary, there was not only a celebration, but also a professional exchange. As regards the latter, priority was given to topics like “climate protection”, “energy-efficient construction and renovation”, “climate-friendly construction” and “climate-friendly mobility concepts”.