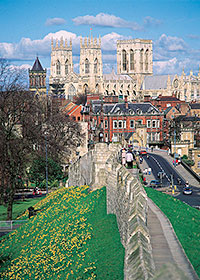 On your way to the old town of York, you will automatically come across bars. However, there is no freshly tapped ale there, because in York, as everywhere in England, the English beer is served in pubs. Rather, bars are the great medieval city gates, which have been preserved until today almost unchanged. Behind them, the visitor will find numerous testimonies from the history of the city: Streets that were already laid out by the Romans, architecture from the Viking Age through the Norman period to the present day. The history of the country can hardly be traced in any other English city as impressively as in York. The small narrow lanes connecting the gates are called “snickleways” and lead through the city off the main roads.

Apart from its omnipresent history, the city of York has even more qualities to offer. York is a popular shopping destination, and shopping centres such as the modern Coppergate Centre leave little to be desired. Several events like the “viking festival” (February) or the “festival of food and drink” (September) take place annually. A visit to the horse races is not to be missed either. In short, York offers a unique combination of fascinating past and modern attractions and can be characterised as a cosmopolitan and cultured metropolis.