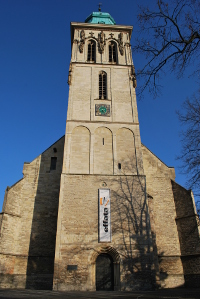 The church dates from around 1320. It has a triple nave with round shafted pillars and a baroque canopy tower that was designed by Schlaun. The Martini Church was originally a triple-nave basilica, but only the lower part of the tower still exists today.

Well worth seeing: the vault of stars in the chancel dating from the 14th century and a wealth of church treasures including a valuable candelabrum from the 18th Century.

The Martini Church is located at the edge of the old town, directly adjacent to the Stadttheater (municipal theatre) and it is the first youth church in the Muenster diocese.