Meeting place then ... and now 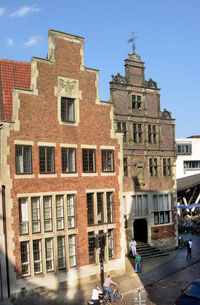 The house within view of St. Lamberti is one of the oldest guild houses in Münster. Erected in the year 1589, the building with its artfully structured stepped brick gable was the meeting place and warehouse of the Kramergilde (chandlers' guild). It served as a lodge for the Dutch emissaries during the negotiations for the Peace of Westphalia.

The House of the Netherlands has been situated here since 1995: an academic, scientific and cultural centre that is unique throughout Germany.