Münster is a city of art - as is demonstrated by the respective museums, exhibition sites, and related training institutions in the city. It is also revealed, however, by how natural it is for citizens, guests, and tourists to encounter modern art again and again in the urban space. Meanwhile, far more than 60 sculptures have found permanent locations in the city, attributable especially to the internationally noted SkulpturProjekte 1977, 1987, 1997 and 2007.

The citizens of Münster refer to the numerous sculptures in the municipal area with a sense of pride. The residents’ affection for “their” sculptures has also increased their awareness for older works that were placed at their present locations many years and decades ago. They emanate impetuses and associations that often open up new perspectives of the history and special features of Münster, spurring dialogue and allowing urban spaces to appear in a new light.

For instance, the Aasee panorama would be incomplete without the “three billiard balls”, the Giant Pool Balls. But also the will-o'-the-wisps in the cages on St. Lamberti's spire and the cherry column by Thomas Schütte have fit themselves in – no doubt as the artists intended - so naturally by now that the cityscape just cannot be imagined without them any more.

The following are a few sculptures in the city centre that are in close proximity to each other around the Prinzipalmarkt: 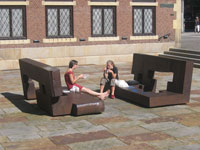 Chilida allows a dialogue situation to emerge between two steel benches. The two solid, Corten steel objects are hollowed out to appear like a maze. Beholders are given space to interpret the sculptures as being opposites between matter and void, gravity and lightness, openness and closeness. The Spanish artist sees the opposites coalesce harmonically into a relationship of mutual tolerance. 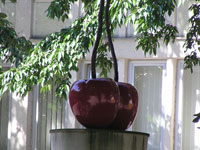 A sculpted sandstone column rises from a concrete foundation bordered by sandstone. It consists of the three elements base, shaft, and capital on which sits an oversized bright-red pair of cherries. With regard to the Harsewinkelplatz location the artist explains: “I just want to garnish this place visually with my cherry column.” 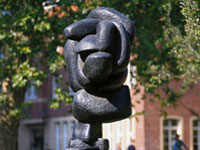 The stone-like, bulging shapes piled up on the pedestal seem to growing, pushing upwards. The painter and sculptor Otto Freundlich modelled the surfaces of the individual elements by spreading on lumps of clay. This gives the surfaces sn animated appearance, emphasising the plasticity of the bronze work. Otto Freundlich employed cubistic forms such as the ones that appear in the works of Pablo Picasso.

The complete “SculpTour” for printing out:

Discover art in the art space

A walk or a bicycle tour to the sculptures is part of the recreational programme in Münster. This is now facilitated by a new, more comprehensive "Sculpt(o)ure Guide" that clears the way to the select works spreading from the city centre to the outskirts. Obtainable for EUR 1 from the Münster Information Centre at the Townhouse 1 or in the historical town-hall, it provides brief descriptions of the select sculptures, five exemplary tours by foot, bicycle, and car, as well as information on guided tours concerning art in the urban space. These informative texts have been designed for both residents and guests of the city. This way you can explore Münster as a city of culture in your own manner.