Tour of the old town

A stroll around the old town of Münster is a journey of many impressions, one that usually begins at the Domplatz (Cathedral Square). The tour continues to the Prinzipalmarkt, Münster’s parlour. Three landmarks typical of Münster are concentrated here: the  historical Rathaus (town-hall) with its Friedenssaal (Hall of Peace), St. Lamberti Kirche (church) with the Baptists' cages, and the characteristically gabled houses with the colonnades, where buyers are attracted by exquisite shops.

From the Prinzipalmarkt, you can reach many of the important tourist sites of Münster comfortably by foot: the Krameramtshaus, the modern municipal library, the so-called baroque island with the Erbdrostenhof, as well as St. Clemens Kirche (church) and the Dominikanerkirche (church).

Weekly market on the Cathedral Square

The cathedral in its present state is essentially a creation of the 13th century. Of particular note is the astronomical clock, a marvel of the late Middle Ages the calendar, which reaches into the year 2071 (carillon and revolving of the Magi, from Mondays to Saturdays at noon, on Sundays and holidays at 12.30 pm). A few steps away from the clock is the sepulchral chapel of Clemens August Cardinal von Galen, the “Lion of Münster”. Pope John Paul II prayed here in 1987. A memorial stone commemorates this event today. The cathedral treasury is also worth a visit. Twelve centuries of the cathedral’s art and culture are displayed here, making it one of the most eminent treasuries in Europe with its objects of goldsmithing and textile art (Tuesdays to Sundays from 11 a.m. to 4 p.m.).

The great weekly market takes place in the shadow of the Münster cathedral every Wednesday and Saturday forenoon. 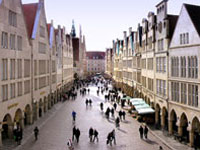 A view to the Prinzipalmarkt

Münster’s Prinzipalmarkt is a piece of living town history, telling tales from the Middle Ages, the Hanseatic League, and the ancient merchant families, some of which still pursue their businesses here even today.

The square with its characteristic gabled houses and colonnades is Münster’s economical and political centre, and it's rich in tradition. This is the site of the historical Rathaus with its Friedenssaal. Numerous exclusive shops and restaurants and cafes are located here as well.

A major part of Münster's city life takes place on the Prinzipalmarkt: This is where the guests of state are welcomed, festivals are celebrated, and where people stroll, shop and enjoy life.

And not just the citizens of Münster consider the Prinzipalmarkt one of the most beautiful squares in Germany. In 2006, it achieved the fourth place in the ZDF feature “Unsere Besten - Die Lieblingsorte der Deutschen“ (“Our best - Germans’ favourite places”).

St. Lamberti’s Market and Town Church is located where the Roggenmarkt (rye market) and Alter Fischmarkt (old fish market) lead to the Prinzipalmarkt. However, the hall church, which was built between 1375 and 1450, owes its high profile neither to the unusual relief of the Root of Jesse cresting the main portal nor to the fact that Cardinal von Galen preached his bold sermons during the Nazi era here, but rather to the gruesome history behind the three cages up on the spire. That’s where the corpses of the three Baptist movement leaders were hung in the mid-16th century.

St. Lamberti accommodates the “loftiest charge office” in Münster, the Türmerstube (chamber of the tower keeper). A tower keeper is mentioned for the first time in records dating to 1383. Except for a few hiatuses, Münster has had a tower keeper since 1950, whose copper bugle can be heard every night (9-12 p.m. on the half-hour, except Tuesdays).

The complete tour of the old town for printing-out: