The bicycle, also named "Leeze", is the most commonly used means of transport in Münster. Therefore, those who want to experience the true Münster feeling should get on a bike.

Hardly any other city is furnished with such a well developed network of bicycle paths and so many bike-related offers. The car-free ring around the city centre is unparalleled in Europe. Here, on the promenade, bicyclists are given the green light. 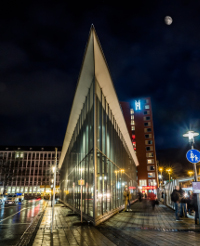 Bicycle station nearby the railway station

There are as many as four bicycle stations in Münster that allow bikes to be parked securely. With its 3,500 parking places, the bicycle station at the main station is the largest one in Germany, offering a repair service, a bike rental, and even a bicycle washing station in addition to the parking places! Bicycles can also be hired from the Muenster Arkaden bicycle station so that nothing stands in the way of a spontaneous cycling tour through Muenster. The service is rounded off by a repair service and the sale of cycling accessories. The “Bike Storage” in the Stubengasse provides space for 360 bicycles. Shopping bags, rainwear or bicycle helmets can be safely stowed away in lockers. It comes as no surprise that Münster has been awarded the title of "most bicycle-friendly city in Germany" several times already.
Bicycle rental

Bicycle tours in and around Münster

You’ll get through Münster comfortably riding on the quiet and safe paths. And from here, dedicated signposts will guide your trips into the region. Be it the Route of 100 Castles, bicycle trips on the trail of Annette von Droste-Hülshoff or all along the new EmsAuenWeg (Path of the Ems Meadows) - you’ll always be on the right path.
Bicycle tours in and around Münster