All around Münster's historical Town Hall

With its high gable, Münster’s Town Hall, a gothic building from the mid-14th century, is second to none in Germany. The characteristic arch house was reconstructed true to the original in the 1950s. 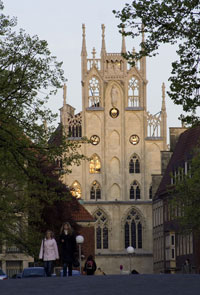 In 1648, the Friedenssaal (Hall of Peace) provided the backdrop to the invocation of the Spanish-Dutch Peace, which formed a part of the Peace of Westphalia.

The hall was restored completely in early 2003. The city scales and the wine supply, the monopole of which was owned by the city council, were kept in the Stadtweinhaus (City Wine House), northern neighbour of the Town Hall and erected in 1615 by Johann von Bocholt.

Bell with intercom on the left-hand side next to the steps (small pillar)
Two information signs for the blind: the history of the gothic Town Hall and the gable of the house located at Prinzipalmarkt 27 in Braille which can be felt.