The awarded Town Hall of Münster

The labeled sites are milestones in the creation of today’s Europe. To walk through one of these sites is to experience European values and civilization in the making. These sites are carefully selected for their symbolic value, the role they have played in the European history and the activities they offer in order to bring the European Union and its citizens closer together.

European Heritage sites bring to life the European narrative and the history behind it. They are about much more than just aesthetics. The focus is on the promotion of the European dimension of the sites and providing access to them. This includes organising a wide range of educational activities, especially for young people. European Heritage sites can be enjoyed singly or as part of a network. Visitors can get a real feel for the breadth and scale of what Europe has to offer and what it has achieved. 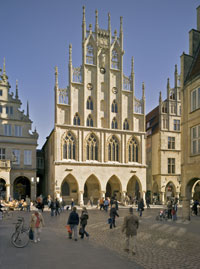 The sites of the Peace of Westphalia (1648) reflect a historical event of outstanding significance for the European history and culture: a devastating war was ended by diplomatic negotiations instead of military force. During the peace negotiations the Rathaus (Town Hall) of Münster played host to prestigious social events. In the Friedenssaal (Hall of Peace) of Münster Rathaus the peace treaty between Spain and the Netherlands was ceremoniously enacted and proclaimed on 15th May 1648. The Rathaus as a historic site therefore stands symbolically for the Peace of Westphalia and represents the places in the city that are connected with it.

The following sites were awarded as well in 2015: