Shopping and going out

Simultaneously old and young – it’s little wonder that contrast and surprises are simply an accepted part of life in Münster. This city offers the world’s largest collection of Picasso graphics behind the facade of a Westphalian aristocratic building, Baroque architectural jewels alongside contemporary architectural icons, today’s popular bars and cafes in an old harbour hall and traditional dark beer cuisine in Münster’s rustic traditional pub district.

For art and culture fans

Münster’s art and culture scene is diverse and vibrant: From the Theater Münster to the location theatre Freuynde und Gaesdte, the numerous exhibitions at the LWL-Museum for Art and Culture, at the Kunstmuseum Pablo Picasso Münster or in the art galleries. More information

The tradition-rich leisure district known as "Kuhviertel" is a lively mixture of student pubs and inviting, typically Westphalian restaurants. Münster geht aus (In German only)

Münster has a lot to offer partygoers and night owls. The "Going out in Münster" food and leisure guide contains recommendations for clubs and parties in the city: Münster geht aus (In German only)

Am Hawerkamp was created on the site of a former concrete factory and is home now to an alternative culture scene brimming with art studios, rehearsal rooms and nightclubs. Sputnikhalle, Triptychon, Favela and Fusion-Club are all well-known far beyond the borders of Münster. www.hawerkamp.de

While Münster’s "Kreativkai" area is fully in line with today’s trends, there is still room for alternative art and music. Numerous bars, cafés and pubs with their own special flair have set up shop here in old warehouses and in the neighbouring Hansaviertel district. Münster geht aus (In German only) 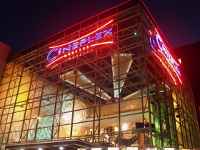 Cineplex Münster – Large format movie multiplex with 9 cinemas and total capacity for 2,700 spectators. The latest blockbusters are on here.

Cinema & Kurbelkiste – Also a recipient of many awards. This small programme cinema has an energetic, lively atmosphere and features many special programmes along with a delightful pub.