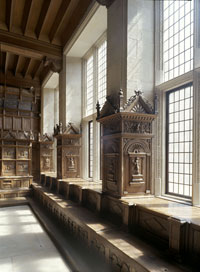 The Friedenssaal in Münster’s gothic town hall owes its name to the peace treaty between Spain and the Netherlands, which was concluded here under solemn oath on 15 May 1648.

The hall originally served as a council chamber, and its fine renaissance wood panelling dates from around 1577. The gallery of portraits, with its pictures of ambassadors, was purchased by the council in 1649. The furnishings of the Peace Hall, which were evacuated during the second world war, have been faithfully restored.

The G7 foreign ministers in Münster

The G7 foreign ministers in Münster

Münster has a great historical tradition as a congress city. Part of the peace treaties of the Peace of Westphalia of 1648 were negotiated in the city for several years.

On 3 and 4 November 2022, Münster was the focus of world political events as the venue for the G7 meeting of foreign ministers. The conference is one of the most important international events in the city's history.
Special page of the City of Münster on the Foreign Ministers' Meeting

Guides
Guided tours only possible with Stadt Lupe Münster, StattReisen Münster and K3 Stadtführung organisations.
Münster Information is available to answer your queries from 10.00am-6pm Mon-Fri and from 10.00am-1pm Sat

A lift can be installed for wheelchairs by prior arrangement.

Two information signs for the blind: the history of the gothic town hall and the gable of the house located at Prinzipalmarkt 27 in Braille which can be felt.