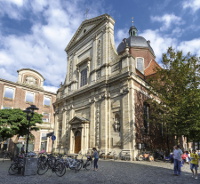 The third component of the “baroque island” at the Salzstrasse is a brick building featuring a Roman baroque façade and an octagonal cupola, built from 1705 to 1725 by Lambert Friedrich von Corfey. The façade joining the west front in an angle is all that’s left of the convent building of the Dominicans. The church building was used by the Catholic university congregation until profanation in November 2017. 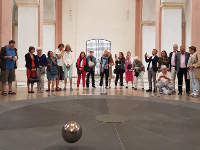 The church is expected to be closed until autumn 2021.
Informationen zum Richter-Kunstwerk