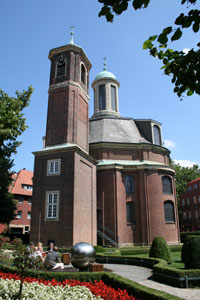 This somewhat hidden church is another magnum opus of the baroque architect Johann Conrad Schlaun, built between 1745 and 1753. It formed a part of the monastery and hospital of the Barmherzige Brüder (Hospitaller Brothers), which was erected by order of prince-bishop Clemens August.

The rotunda central building with its cupola, lantern, and gorgeous interior has been faithfully restored based on Schlaun’s designs.